Investigation of Sinkhole at Glencore's Mangoola Coal Mine 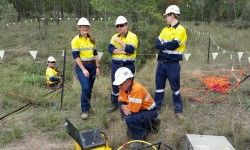 In both Open cut and underground mines, there is a frequent need to investigate unknown cavities and voids either near the surface or deep underground. The challenge for the mine management is to determine the best way to address this need.

Austech Surveying & Mapping was asked to look into the investigation of a possible sinkhole or cavity close to the workings of an Open cut coal mine for Glencore. The questions that needed answering were how deep did this sinkhole extend, how far and which way did it travel in a lateral direction.

The task was to establish the position of the cavity's extents under the ground surface.
Management were concerned that the extent of the sinkhole may go further into the open cut workings zone and thus something of a hazard. The dilemma was that it was considered too risky to allow personnel to enter this unknown cavity for direct inspection and assessment.

Other ideas such as GPR or various cavity investigation tools were considered but in the end were deemed to be unsuitable for this scenario. The access hole was too limited in size to accommodate the larger type of cavity scanning tools. GPR was considered to be not precise or reliable enough in this circumstance because the extent and depth of the void was unknown.

Austech Surveying & Mapping were called on to develop a solution to do an investigation on determining the void extents. First step was to check that the void and surrounds were free of Methane and other explosive gases. The limits of how close personnel should approach the void opening was established with safety barriers. Personnel with harnesses and suitable training were the only ones able to get near the void opening. With these physical restrictions and challenges, Austech decided that use of a miniture robotic laser scanner C-ALS) was the most appropriate. With a diameter of just 50 mm, the probe would be deployable through the narrow access hole

Given that initially the stability of the zone area was unknown, Mangoola Coal Rescue personnel were seconded to assist in the deployment of the equipment and preparations of risk assessment. With safety harnesses and other precautions within the restricted zone, the Rescue team were instructed by Austech how to deploy the instrument down the hole opening.

The C-ALS scanner was lowered down the hole which reached into the sinkhole proper. A camera in the head of the C-ALS unit allowed the Austech operator to check on the progress of the gear being lowered via a cable link to a computer outside the restriction zone. This also gave a real time check on the conditions in the hole. Once securely settled in place, the laser was activated and the void scanned to provide a 360 degree point cloud of the sinkhole. This was available in real time which enabled the operators to assess what further scans would be needed. This allowed Austech to fully map the void without needing personnel to venture any further into the sinkhole - an important requirement when safety is a primary consideration.

The whole field process took just a few hours. Back in the office, Austech were able to create a geo-referenced ascii point cloud of the cavity to fit into existing 3D mine data. This model of the void was provided to the client so that they could incorporate the fully geo-referenced cloud into their own mine map with their own software.

The final outcome of this project was that Mangoola Coal were able to effectively assess the extent and location of the inaccessible sinkhole. According to Simon Jay, Mine Surveyor at Mangoola Coal,  “The model data was an invaluable source of information for management to confidently plan and carry out the re-mediation to deal with the issue.”

Austech wish to acknowledge the professionalism of the team at Mangoola and their cooperation in pursuing a satisfactory solution to the project.